Last week my family laid to rest my step-father-in-law, Coach Leon Burtnett.  Leon was a part of our family for more than 20 years.  It was certainly a tough week, but the silver lining to times like these are the tributes and conversations that you get to have about how your loved ones impacted people over the course of their lives.  “Coach” was a big guy with a gruff, thundering voice.  He boasted a larger-than-life resume, having coached for nearly 50 years including stints as Head Coach at Purdue University, as well as time as the Running Backs’ Coach for the Indianapolis Colts.  He was Big 10 Coach of the year in 1985, and he was a part of numerous bowl games and other successes over the years.  His funeral was attended by his former players, coaches from both college and professional ranks, and even an NFL Hall of Famer or two that he had coached over the years. 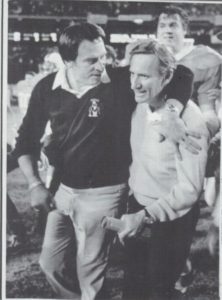 The irony to all of this is that to all of us who came to know him in the latter years of his life, you would have never known that he was such a ‘big deal.’  Leon (as we called him) wore the evenness and professional humility of a person who had spent decades in one of the most vicious and cutthroat professions outthere.  Undoubtedly, he had seen the highest of highs and the lowest of lows more than once through the coaching carousel.

He constantly consumed sports of all kinds but refused to read the sports page – undoubtedly one of the many life adjustments he had made to his profession.  You were 100x more likely to catch him bragging on the accomplishments of his kids and grandkids than to ever hear a peep about his coaching past or about the celebrities that he knew and spoke with on a daily basis.  He was accessible, kind and laser-focused on caring for his friends and family.

After retiring from coaching, he took what he referred to as his ‘retirement job,’ selling cars at the local Chevrolet-Cadillac dealership here in Jonesboro, AR.  To him it was the perfect gig as it afforded him the opportunity to do his two favorite things: 1) aggressively compete and 2) wheel-and-deal on vehicles.  From the outside looking in, you would think that this step-down from a big stage would have been a challenge for him, yet over his years selling cars he was routinely recognized for being the top seller, with a reputation as the salesman most love 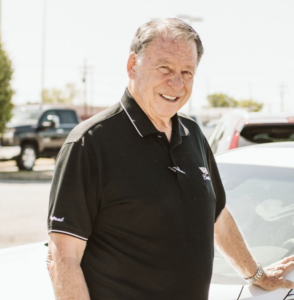 d by his customers.  The dealership owner even told me that Coach was synonymous to car sales because the majority of his business came into the dealership looking for him specifically, rather than him having to chase it around the parking lot.  People loved Coach so much so that they told their friends and family that he was the guy to speak with if they were ever in the market for a new car.  It was a testament to the way that he treated people both before and, more importantly, after the sale.

In the end, Coach had a lot of special traits, but two things set him apart in my mind:

First, he made everyone matter all of the time.  No matter if you were NFL Hall of Famer Rod Woodson or Doug “the nobody” Maglothin, Coach treated you exactly the same way.  He wanted to know you and to know how to be proud of you.  He proved this every day by bragging on you to whomever would listen.  In doing this, he was able to inspire and motivate you like few others could.  As a result, he was  the best kind of leader and a world class recruiter throughout his career.

Perhaps more importantly, he was notorious for his very intentional daily and weekly phone calls to his friends and family.  We realized this week that so many of us received those calls, we all now wonder how he found the time.  His time was dedicated to reinforcing the notion that you mattered to him.  He was committed to prioritizing the things that actually mattered in his life, outside of work, success, wins and losses.  Even with a network as large as Coach’s, he kept this in the forefront of his efforts.  We will all miss these calls, but as bittersweet as it may feel right now, we celebrate and learn from these habits that Coach taught us all.

Our grade as leaders most often gets boiled-down to metrics that are understood as the function of input variables above a sum line.  I would attest however, that the legacy of our leadership as it is evaluated after our time at the helm will have far less to do with numbers and far more to do with how well we looked after our own.  I have been guilty in my younger years of blowing past people’s thoughts and feelings in favor of what I perceived to be the most effective solution to a problem.  Through many ups and downs, highs and humbling experiences, I now find myself looking at things from a different perspective.  The best leaders recruit the best people and then spend their time making every minute matter for them by keeping their path as clear as possible.  This was Leon in a nutshell and, for me, being a great “Coach” will remain my career aspiration.